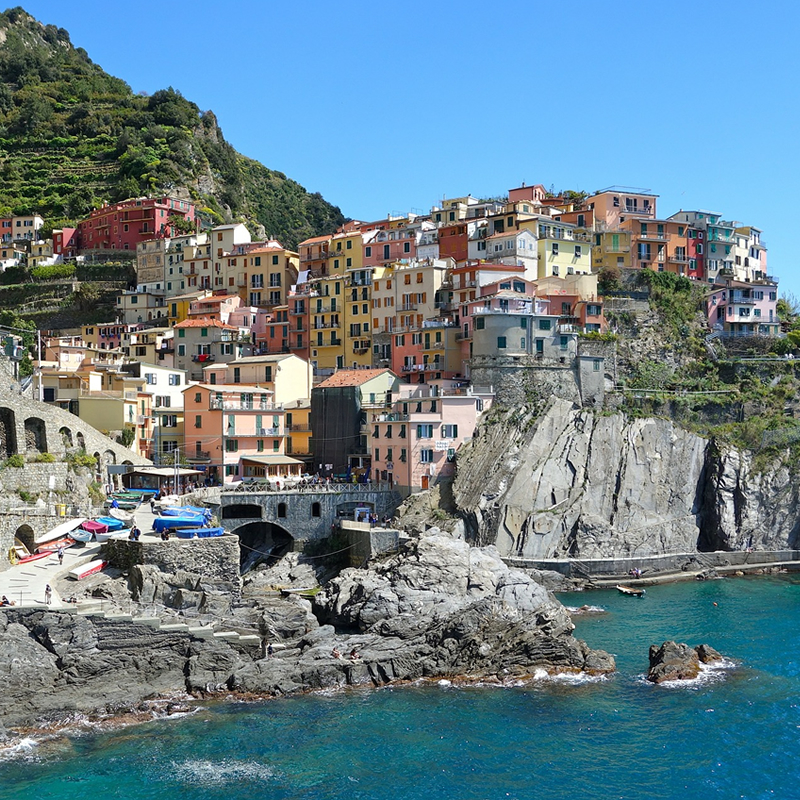 It is in the Liguria region of Italy, to the west of the city of La Spezia. “The Five Lands” comprises five villages: Monterosso al Mare, Vernazza, Corniglia, Manarola, and Riomaggiore.

The coastline, the five villages, and the surrounding hillsides are all part of the Cinque Terre National Park and is a UNESCO World Heritage Site.

Over the centuries, people have carefully built terraces on the rugged, steep landscape right up to the cliffs that overlook the sea. Part of its charm is the lack of visible corporate development. Paths, trains and boats connect the villages, and cars cannot reach them from the outside. The Cinque Terre area is a very popular tourist destination. 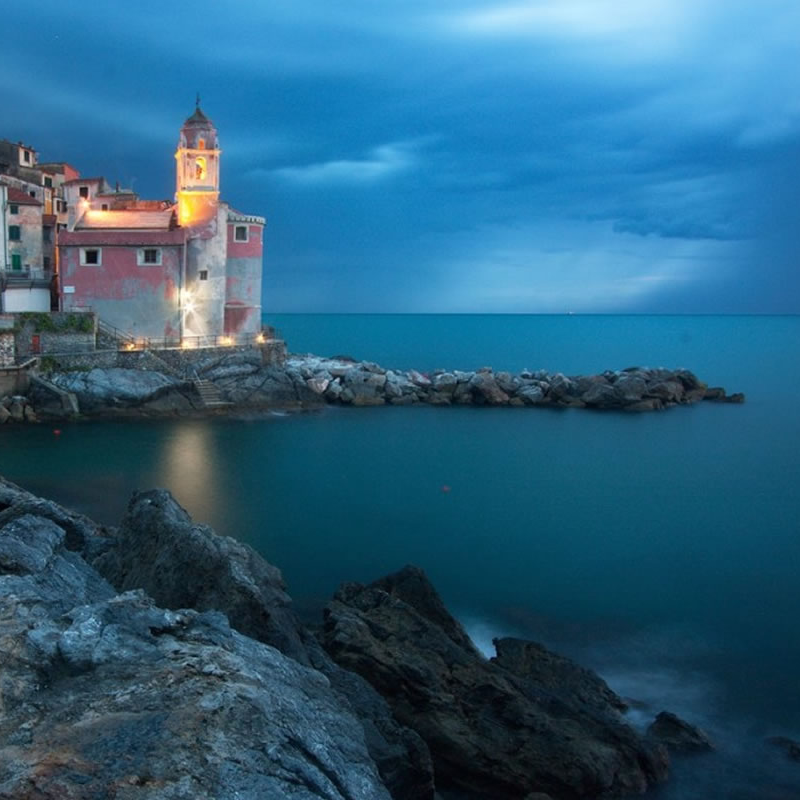 Villages on the sea, green hills and clear water. The Gulf of La Spezia can be discovered easily and it is not surprising that this was greatly beloved by poets and writers such as Shelley, Byron, Petrarch and Montale.

From them he took the name of auo Gulf of Poets, which comes from Lerici to Portovenere embracing between two capes beaches, rugged coastlines, deep blue sea, ancient villages and wild nature.

Tellaro, San Terenzo, Fezzano, Le Grazie, the island of Palmaria, Tino and Tinetto. Enchanted places and enjoyable, once part of what was the historical Lunigiana, so different from the Lunigiana inside, but so united customs, traditions and cuisine. 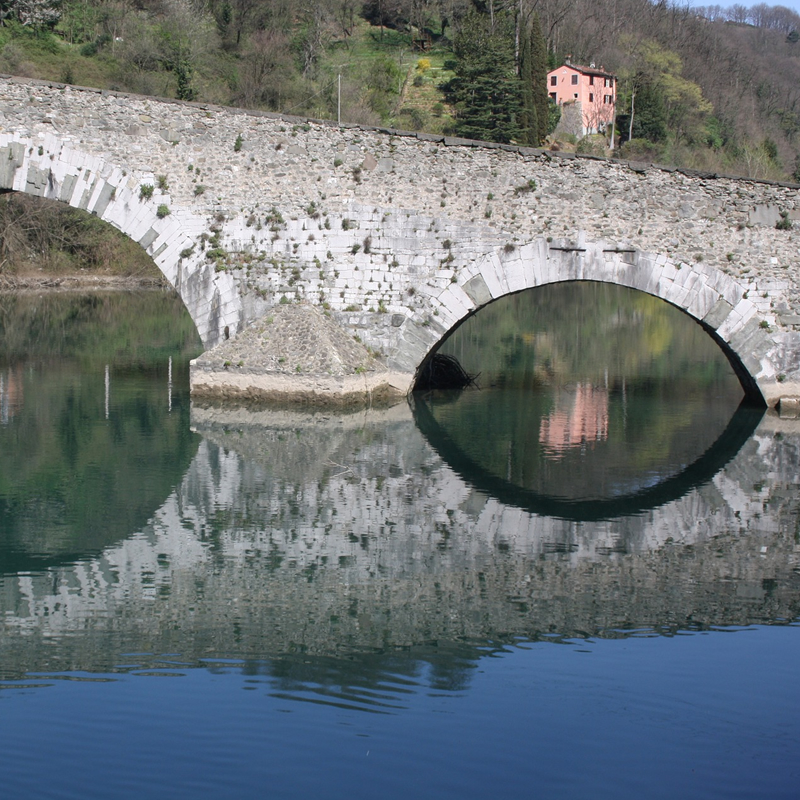 Lunigiana covers an area from the Apennines to the Magra river, belonging in part to Tuscany and in part to Liguria.

It takes its name from Luni, a Roman town, perhaps pre-dated by an Etruscan settlement, which became the principal urban center on the northern Tuscan coast. Some contend that the name Luni refers to the moon, a celestial body whose beauty is made all the more attractive when framed by the white-peaked Apuan Alps and high Apennine mountains.

Others maintain, though little or no evidence exists, that the region was populated by those who worshiped the moon. As if to unite history and myth, the symbol of contemporary Lunigiana is a crescent moon held in the claw of a bear. The earliest inhabitants of this region may have been the Apuani (from which is derived the name of the Apuan mountain chain), an ancient Ligurian people, as well as Etruscans who may have inhabited towns along the coast and even the hamlets near in-land trade routes. Curiously, while evidence of both Roman and later Medieval settlements are ample, the wondrously appealing stele, late pre-historic and Bronze Age stone statues which have been found in large numbers in this part of Tuscany, remain the symbol of this ancient land.

They are the first expression of the art and, perhaps, of the religious beliefs of the peoples that inhabited northern Tuscany from the Bronze Age to start of the Roman Empire. 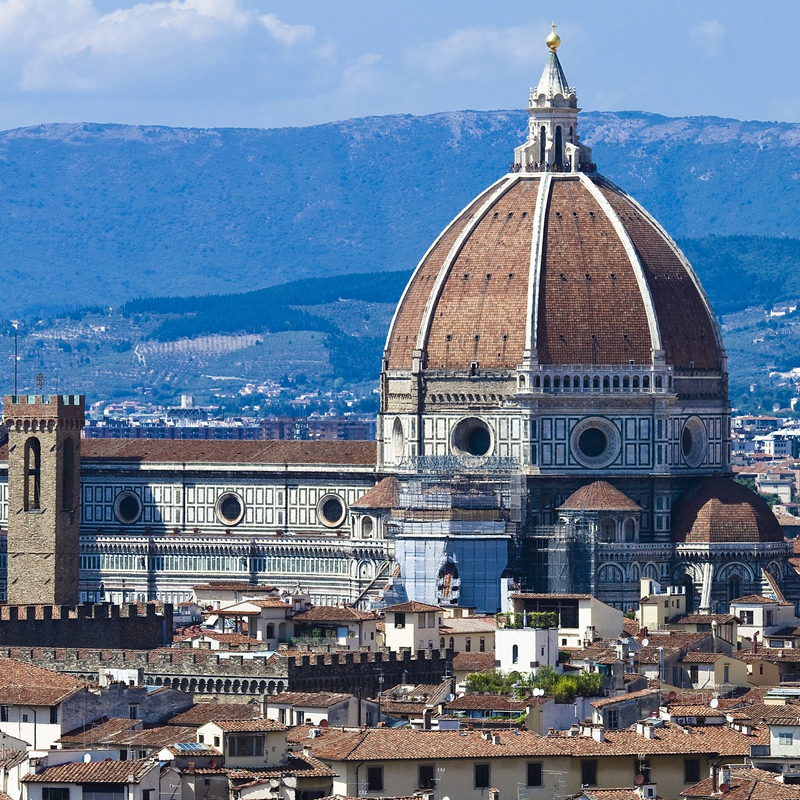 Lucca is a city and comune in Tuscany. It is famous among other things for its intact Renaissance-era city walls.

Firenze is considered the birthplace of the Renaissance, It was declared a World Heritage Site by UNESCO in 1982. The city also contains numerous museums and art galleries, such as the Uffizi Gallery and the Palazzo Pitti, amongst others, and still exerts an influence in the fields of art, culture and politics.

Pisa is known worldwide for its leaning tower, it is one of many works of art and architecture in the city’s Piazza del Duomo, also known, since the 20th century, as Piazza dei Miracoli (Square of Miracles), to the north of the old town center.

Per avere qualche informazione in più